← #1 Cardinal Rule of Blogging
If They Would Just Go Green… →

An Act of Congress Brought to You by Wonderbutt 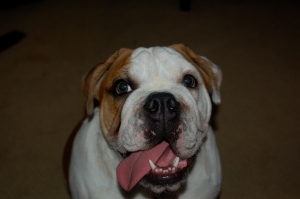 So, the other day, when “Stevie”, whom my husband lovingly refers to as “Wonderbutt”, decided to do a major renovation to three of our rooms, I reacted as most people would upon finding that your bulldog has ransacked your house- I attempted to clean it up as fast as I could before my husband came home.

No time to grieve the sopping wet stuffed animals stolen from my daughter’s bed.  No weeping over the flipflop with chew marks all over it.  I set about erasing as much evidence as I could before my husband got home from work – 15 minutes after the initial discovery of the crime.  I was trying to set things straight because, when Wonderbutt did his last redesign that involved ingesting 1/4 of our carpet padding, my husband said, “Maybe we should replace the dog instead of the floor.”

I think he was mostly joking, but I really didn’t want to find out.

Amazingly, my husband arrived home to a partially cleaned up mess, but did not seem too perturbed about it.  At all.  I was slightly surprised.

My daughter, however, was quite upset by this turn of events.  She came running to me with tears in her eyes.

“Daddy won’t get mad at Wonderbutt!”

“He says it doesn’t make any sense to yell at him now because he won’t know what he did wrong!”

“I know, but he’s a dog, and you have to yell at them when they are in the act so they know what you’re so upset about.”

She gave me a look that pretty clearly stated her lack of confidence in my dog whispering skills, and left the room in a huff.

Her exit left me to reflect on:

Yes, I was watching Jon Stewart at the moment.  But, take a look at the preceding dialogue, and substitute Congress in for Wonderbutt and his related pronouns.

It kind of works, doesn’t it?

← #1 Cardinal Rule of Blogging
If They Would Just Go Green… →