Despite the fact that her father never learned how to swim and her mother has absolutely no coordination, our daughter, Dimples, did well in her synchronized swimming events this weekend.  I don’t think that she has aspirations to go to the Olympics in the future.  But, if she did, I can imagine the video that they would show as a short biography during the Olympic coverage.  You know, one of those moving chronicles in which the narrator, Bob Costas, outlines all of the obstacles the athlete has had to overcome to get this far – beginning with the genetic disasters who spawned her and ending with the tragic, near career-ending injury that occurred six months before the Olympic Games.  In between those dramatic bookends would be the years that she fought putting her face in the water for her teachers at the Y.M.C.A., her amazing breakthrough when she turned 5 and took lessons at our new neighborhood pool, and the time she nearly drowned in 6 inches of water at the river after taking 3 hours to get confident enough to skip from stone to stone.

And then there would be the Wonderbutt Years, the suspenseful part of the story when a new puppy entered our household and threatened to turn all of our lives upside down.  This turn of events was particularly challenging for the budding young athlete, Bob Costas would say, because her vital equipment such as nose clips, goggles, and even her nearly indestructible duct tape swim bag, were in constant peril of being devoured by the bellicose bulldog.  And the family would nearly be wiped out, financially, by the dog’s ravenous appetite for furniture and floor coverings – making the cost of extracurricular activities nearly prohibitive.

But, through all of these hardships and unusual complications, Dimples prevailed.  Financing her college education with full-tuition scholarships, and gaining a sponsorship from Knox gelatin, Dimples was able to work her way to become one of the best swimancers* in the world.  Once she moved away from home, and Wonderbutt could no longer thwart her, Dimples –

Hmm.  Sorry.  Got a bit carried away there with that. 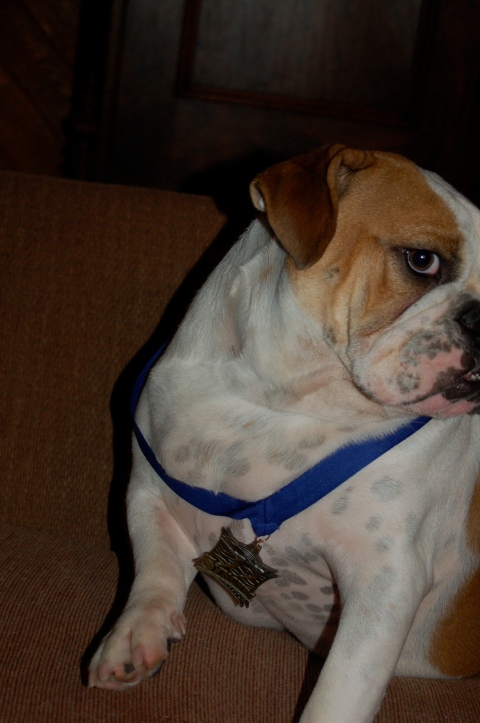 Since I don't put pics of Dimples on my blog, I thought Wonderbutt could model one of her medals instead. 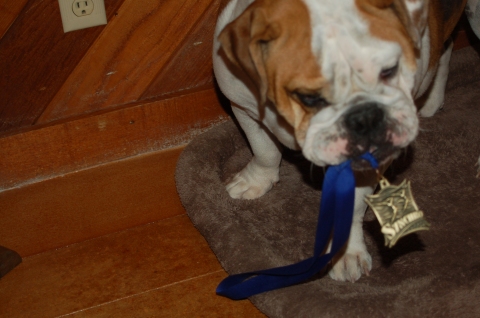