I honestly think I could stretch these posts about our 3 days at The Ranch until Christmas.  The Popularity of the Poop Bug Post made me realize just what kind of minutiae my blog readers really crave.

So, quick recap in case you are too lazy to read the last 3 posts (which I am too lazy to link to, so we’re even):  we went to The Dictator’s Ranch, Wonderbutt was unintimidated by the Wall of Death or The Ranch cat, Wonderbutt kept me up all night, and then almost drowned in the pond, but was saved by Dimples, who is 9 and not at all brawny enough to be rescuing 70 pound bulldogs scrambling for their lives.  Now you’re all caught up.

I kind of lied in the title of this post, because I must present you with a few pictures of Day 2 before we proceed to Night 2.  I need to lay the groundwork for my 2nd Night of No Sleep.

Wonderbutt had a busy day.  After nearly drowning, we went for a walk up to the barn. 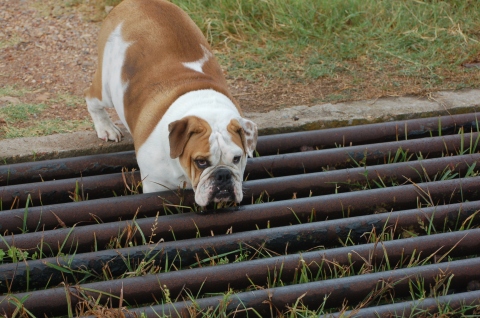 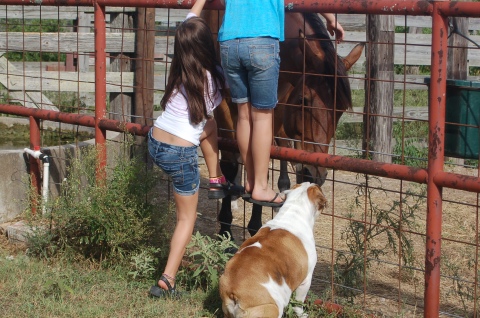 Wonderbutt did his best to bully Pitt, the horse. Pitt merely offered his muzzle for Wonderbutt to lick it. I’m sure, if Wonderbutt had been on the other side of that fence, and there were no paparazzi around, Pitt would have kicked him over the hill and back into the pond. 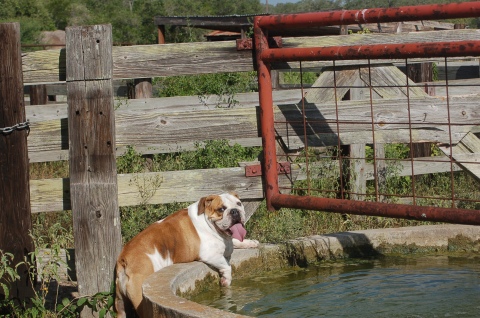 Wonderbutt contemplated plunging into the horse trough, but decided it was too much work.

In other words, Wonderbutt was pooped.  There was no way Wonderbutt would keep me up again all night.  NO WAY.

Being the proactive person that I am, I informed Cap’n Firepants that he would be in charge of Wonderbutt for the 2nd night.

“Fine.  But you are sleeping next to Dimples.”

“Hah!  No problem.”  You just got the worst end of that deal, I thought to myself.  Dimples sleeps, and does not try to dismember cats in the middle of the night.

I went to bed early.  About an hour later, the rest of the Firepants Family joined me.  I drowsily listened to Wonderbutt settling in on the floor at the foot of the bed, welcomed Dimples to her spot beside me, and hoped that the Cap’n understood that, when Wonderbutt started whining to leave the room so he could go tear apart the cat, the Cap’n would be following him.

The Cap’n was in a deep slumber.  So was Wonderbutt.

I turned my back to Dimples, my sweet, non-violent daughter, and went back to sleep.

Then the Blanket Battle began.  Dimples would roll over, leaving me with an edge of the blanket about three inches wide.  I would tug it back from her, only to be back in the same freezing position thirty minutes later.

I got smart.  Anticipating a roll-over maneuver, I grabbed my corner of the blanket before she could pull it away.

She sat up in bed with her eyes still closed, and engaged in a Tug of War to the Death.  That girl is freakishly strong in her sleep.

I am freakishly strong when I’ve had no sleep.  And when I’m fighting a comatose child who weighs 70 pounds less than I do.  I won that time, then rolled my twice as heavy body over a quarter of the blanket so it would be impossible for her to yank it away from me again.

And the Cap’n and Wonderbutt slept on.

And I hated them all – the whole darn Firepants Family.  What kind of stupid vacation weekend was this?

Once again, the next morning, I was the Lazy Sleeper Inner.  Who told Tall Tales of a 9 year old girl who beats up her mother in the middle of the night.

No one believed me.

Next time, I need to just let Dimples give me a black eye.

Or suddenly come down with a case of the Shingles right before the car pulls out of the driveway for our “relaxing” weekend.

Posted on September 11, 2012, in Uncategorized. Bookmark the permalink. 23 Comments.