← We Give a Whole New Meaning to “Discriminating Taste”
We Tried to Make You a Gift, But Hobby Lobby Screwed it Up →

I’m Like the Hugh Jackman of the Blogging World

So, my daughter graduates from 5th grade this week.  I won’t go into my opinion of the ridiculous lengths some schools and parents put into making the exit from elementary school (which is, after all, compulsory, so I am not sure how it qualifies as a major achievement) an event that would rival the Academy Awards.

I’m not going to talk about that because I have my own awards to acknowledge, and since I won them by working my butt off on stuff that isn’t required, (mostly because no one cares enough to require it) I figure they are far more legitimate than the congratulatory certificate my daughter will receive for completing the first phase of her mandatory education.

I should probably apologize to some of you because I think some awards may have fallen by the wayside during the last 6 months.  When my medication was not working, I had a tendency to be dismissive of awards because I thought that I didn’t really deserve to live, much less to receive an award. But now that I am back to my old self again, I realize that, of course, I deserve all accolades that are heaped upon me – and even the ones that aren’t.

According to my somewhat incredibly vivid memory, I believe Alexandra microrrelatososhortstories gave me a couple of awards awhile back: 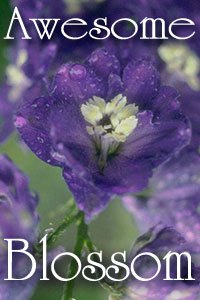 I like these because they are pretty and aren’t on my Awards Shelf yet.  It’s nice to have a bit of variety on the Shelf.  Plus, the awarder, Alexandra, is internationally acclaimed (she started her blog in Mexico City), so I’m pretty sure I can safely claim now that my blog has gone Global.

And, a bit more recently, Monica at A Day in the Life awarded me the very interesting “Interesting” Award.  Another award that had not graced my shelf until now.  What’s even more significant about this award is that Monica is a Blogger Blogger, not a WordPress Blogger.  Which is like giving an Oscar to The Wheel of Fortune.  So now I just need to get an award from a TypePad Blogger and I’ll have a Blogging Triple Crown…

Monica’s award comes with a bunch of terms and conditions.  Usually I ignore this part of blogging awards.  I mean, does the Academy require Clint Eastwood to agree to stand on his head for twenty minutes while juggling fish with his feet and then pass his trophy on to someone else?  I think not.  But Monica is one of my number one commenters (plus, she lives in my town, so we might run into each other one day), so how can I refuse to at least answer some of her very creative questions?

So, thank you to Alexandra and to Monica for recognizing my awesome talent and having the sense to wait until my new medication started working to declare their admiration of my amazing blog.  Right back at ya, ladies 🙂

Posted on June 2, 2013, in Blogging, Humor and tagged awards, blogging, don't give me red carpet because Wonderbutt would just eat it, humor. Bookmark the permalink. 16 Comments.

← We Give a Whole New Meaning to “Discriminating Taste”
We Tried to Make You a Gift, But Hobby Lobby Screwed it Up →