← Let’s Face It. You Will Probably See this Exact Post Again at the Beginning of August.
Trying to Live Without Jon Stewart →

Yesterday I had to fend off a wild beast with an artificial vagina.

Okay, the beast was not so wild.  But she was extremely forward.  Apparently, the father of my daughter’s swim coach feeds her from his hand,  so she expects the same treatment from anyone else who visits the back yard.  Her name is Rhonda. 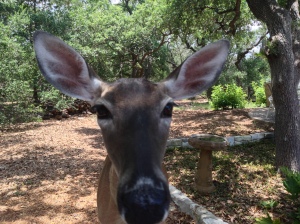 Rhonda – right before she realized my iPhone is not edible

Oh, and, as you probably suspected, I did not use an artificial vagina.  I used my cell phone.  And I didn’t really beat her with it.  She backed off when she realized it wasn’t food.

These are the kinds of adventures I have in suburban San Antonio.

James Herriot, on the other hand, the British country vet who wrote a series of books about his life, really did, apparently, get to repel an angry bull by beating it on the face with an artificial vagina.  The bull, not surprisingly, was a bit upset at this man who kept interfering with things each time he tried to “service” a cow.

Comedy gold.  This kind of thing never happens to me.

Instead, I find myself in the enviable position of reading the chapter about it out loud to my 10 year old daughter, and explaining the concept of artificial insemination to her.  Because I:

a.) have absolutely no memory of reading that particular chapter when I read the book at her age – or even when I read it again a few years ago

2.) am too lazy to read ahead to see if this might be a chapter best skipped

III.) have not enough imagination to “wing it” and make something completely different up when encountered with the sentence, “All you did was wait till the bull started to mount, then you directed the protruded penis into the A.V.”

Quatro.) was so relieved that this chapter did not include the death of any animals that I figured I might as well keep on going.

For her part, my daughter seemed to take the entire thing completely in stride as she folded her clothes while I was reading – although we both lost it completely when the bull slipped during his millionth attempt to mount the cow and avoid the vet trying to grab his penis, and “slid clean under the cow.”

I think it could come in useful as a conversation starter.  Plus, our houseguests could use it to fight off our bulldog, Wonderbutt, when he tries to hump their legs.

I’m going to get a story out of this somehow.

← Let’s Face It. You Will Probably See this Exact Post Again at the Beginning of August.
Trying to Live Without Jon Stewart →