It takes a lot of work to sit down at your computer, open up your browser, and Google a bunch of symptoms.  Then, we are required to expend our remaining energy on focusing on the list of results so we can narrow it down to the exact fatal disease that is killing us this week. This requires a single-minded commitment that most of us do not possess.  So, we often end up finding all kinds of infirmities that don’t precisely fit our conditions, but have great potential for afflicting us in the future.  I don’t know how you deal with this plethora of plagues, but I used to save them all in bookmarks on my browser.  Just in case.  I mean, just because you don’t have Elephantiasis now doesn’t mean you won’t be swollen up by Christmas.  It’s important to be prepared.

Then it occurred to me that this is the exact type of situation for which Pinterest was invented.

What I need is a board that shows me all of the different diseases I can get if I’m bitten by a tick in South America.

So, I set about creating my Pathophobic Pinterest Boards.

They include:  Parasites That Live Inside Humans, Skin Gone Wrong, Infections Caused by Sea Snails Under Your Skin, Can I Die From Inhaling Dog Farts on a Regular Basis?, What to Do If You Suspect You Have Ebola, and What Does It Mean When Your Left Eye Keeps Twitching?

Note that I added the Sea Snail pin to two boards because it is obviously a matter of Skin Gone Wrong as well as a prime example of Infections Caused by Sea Snails Under Your Skin.

You may notice that I have not actually pinned anything on to the Diseases You Get from Being Bitten By a Tick in South America board.  Google was very unhelpful on that subject.  But I’m leaving the board there.  Because I know that it’s only a matter of time.

The great thing about using Pinterest is that you are notified if someone else has pinned that exact same item on a board.  This is gratifying because then you can be comforted by the fact that you are not the only obsessive compulsive hypochondriac collecting potential diseases.

I am sure I will be adding more boards and pins soon.  In fact, I have been playing around with the idea of adding an Experimental Drugs That I Will Probably Need in the Future board because it’s really hard to keep track of those pesky trials and you never know when you’re going to need one.  The problem with adding that one is that I’m afraid the drug companies will get wind of my interest and hike up their prices and/or fabricate the results.

It’s difficult being a paranoid hypochondriac with a social network. 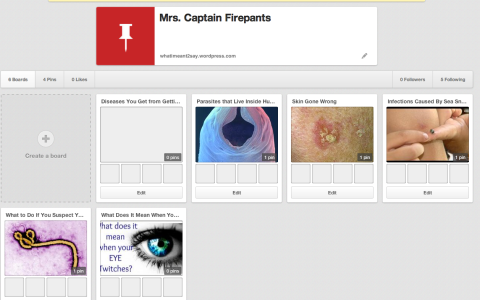 Posted on August 20, 2013, in Disease of the Day, Disorder of the Day, Humor, Phobia and tagged disease, health, humor, hypochondria, Pinterest. Bookmark the permalink. 39 Comments.