That’s a Stupid Place to Hide a Screw

The appliances in my house have obviously observed my recent concerns with making my house look presentable just in case I get serially killed, and have chosen the last few weeks to rise up against me.  Being bullied by inanimate objects with tremendous electrical power has made me long for the days of childhood where the only thing I had to give up to appease my antagonizer was my milk money.  Now the stakes are a bit higher.

Our kitchen sink backed up.  The garbage disposal refuses to eat garbage.  The washing machine stopped spinning the water out of the clothes.  And the dishwasher’s top rack fell just enough to start whacking the dishes on the bottom rack with its spinner, taking nice chunks out of any plates we are dumb enough to put down there.

I drew the line at the shredder.  I’ve always been a bit intimidated by this beast who is just waiting to chomp my hand off the next time I dangle a ream of unwanted credit card applications near its eager fangs.  However, I started getting too comfortable with my daily brushes of danger this summer as I cleaned out a filing cabinet of paperwork from the Nixon era.  I thought I was being clever by shredding things until the machine over-heated, and then waiting until the next day to continue with the stack. But it was only a matter of time before the shredder decided to stop playing this game and conk out on me altogether.

I’m no fool.  I knew the shredder was just biding its time, hoping I would stick my fingers in its mouth to try to pry something loose.  And I did.  But I unplugged it first.  Because even though it has a safety that is supposed to guarantee it won’t suddenly start grinding things up when you take it off the base, I learned a long time ago that things that should be safe for the majority of humankind are never safe enough for me.

But nothing was stuck in there.  And, gosh-darn it, the stupid thing was working fine in reverse.  It just refused to suck any paper in.

I thought about turning it upside down to see if I could reverse the reverse, but that seemed like it probably was just a recipe for disaster.

In our house, when something breaks, we have three choices: my husband fixes it, we call a repair person, or we buy a new one.

It seemed unlikely that it would be worth calling someone to the house to fix a $40 shredder.  My husband was in the middle of trying to fix our toilet, and didn’t want to hear about the tragedy that would unfold if we could not get crosscut our paper waste so thieves would be unable to go through our garbage to steal our identity.  And I did not want to buy a new shredder.

So, I decided to take matters into my own hands.  The thing was already broken, so it’s not like I could make it any worse.

The first step was to unscrew the top.  I grabbed a Phillips and went to town.  Six screws later, I tried to pry it apart.  Nothing doing.

I called in my husband.  After he checked to make sure I had unplugged the appliance because he knows my history of ending up in the emergency room when I attempt DIY projects, my husband tried to pry the top off.  He investigated the entire piece to make sure I had unscrewed everything.  But it still wouldn’t come off.  He shrugged and wandered back to his precious toilet.

I glared at the shredder.  I went to the computer and typed in, “stupid top of shredder won’t come off even though I unscrewed all of the thingies.”

Yeah.  So that’s a thing, I guess.  Other people have experienced the same frustration, according to message boards.

“I got it off!” I yelled to my husband minutes later after reading one clever reader’s advice.  He was suitably impressed.  I think.  It’s hard to tell when he just mumbled, “How?’ while he glared into the bowels of the toilet tank.

“The last screw was hidden under the warranty sticker!” 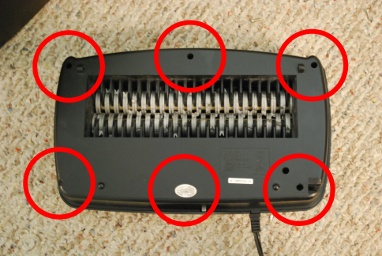 Thank you, skoobalon.com, for this image!

My pride did not last long.  I realized when I popped the top off that I had absolutely no idea what to do next.  Plus, it was kind of greasy and yucky in there.  And those nasty sharp teeth were in the perfect position to take a chunk out of me.

Back to the internet.

“Now that I got the top of the shredder off, how do I make it start eating paper again?”

I found a lovely page where a man actually posted photographs of what the inside of my shredder should look like.  He even added helpful arrows to the pictures.  I love this man and maybe would consider divorcing my husband to marry him if I thought he would be as understanding as my husband about women who get in strange cars in the parking lot or dogs who can’t figure out if they want to come out of the closet or not.

An hour later (I’m spatially challenged so even pictures on the internet take me awhile to translate to real life) I ran victoriously into the living room where my daughter and husband (who had not fixed the toilet but actually made it worse) were watching t.v.

“I fixed the shredder!” I yelled, waving the screwdriver around happily.

Maybe they would be more impressed the next day when I rescued our 300 c.d.’s from the disc changer that stubbornly refused to change or even open…

(No, they weren’t.  Repairing things is really a thankless business, I’ve decided.)