It’s Not all About His Pirate Booty

I feel sorry for any woman who is not married to a pirate. 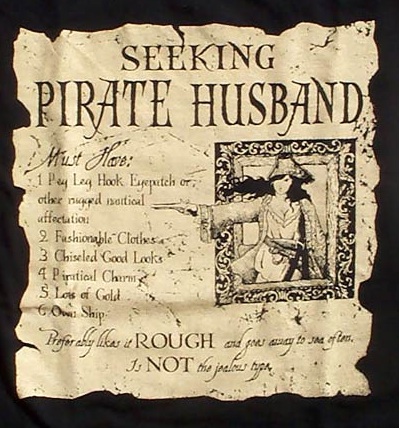 My own swashbuckling buccaneer rescued me once again this weekend.

Cap’n Firepants may not be a pirate in real life, but no genuine pirate would be fierce enough to face my husband’s daily trials.  Forget scurvy, rotting teeth, and cut-throat shipmates; Cap’n Firepants has to deal with Wonderbutt and me.

At the conclusion of my not-so-great birthday week, Cap’n Firepants sensed that my dissatisfaction with the lack of fireworks and parades in my honor could only be alleviated by one thing – an afternoon of shopping.  So he generously volunteered to usher Dimples to her synchronized swimming practice and remain for the entire 2 1/2 hours since she might or might not be feeling well enough to survive the rigors of stretches, laps, and rehearsal for an upcoming show.

I embarked on my afternoon of freedom with high hopes of finding some brown ankle boots to replace the pair that I’ve had for 10 years.  Before heading to every woman’s shoe Mecca – Nordstrom’s – I made a quick stop at a mega shoe store across the highway.  I scanned the aisles for something that fit my simple criteria: brown, sexy, comfortable, classy, appropriate for work, appropriate for a night out on the town, the envy of all women on earth, reasonably priced.

With that background research accomplished, I now felt I was justified in making a trip to Nordstrom’s.  I headed back out to my car to continue my journey.

A few things went through my mind – the first being, “Of course.  How else could I end this less than stellar birthday week, but with a disappointing afternoon stranded in the parking lot of a store I’ve already scoured up and down?”

Because it’s all about me, People.

Over the years, Cap’n Firepants has had to: change at least two of my tires, drive home from work to let me into the house, drive home from work to take me to the hospital, stay up until 1 A.M. trying to fix a garage door that I broke (not even ours – long story for another time), and drive to my school because I took the wrong set of keys (his).  He has never once complained, called me an idiot, or in any way shape or form used any of these situations to make me feel guilty.

And he didn’t start now.

After I explained the situation, and we decided that I wasn’t exactly in dire straits, being stranded in the parking lot of a major mall in broad daylight with a SuperTarget across the street, he offered to finish up supervising Dimples’ practice, swing by the auto store to get a new battery, swing by our house to pick up his tools, and drive the 20 miles to where my pitiful car that he hates waited to spit grease all over him.

He didn’t even yell at me when it started raining as he began the delicate operation of attaching wires to the new battery.  We’re in a SEVERE DROUGHT, People.  And it started raining right during the five minute time period that was pretty much the only moment in the last 6 months we would have asked for it to NOT start raining.

The testament to his true nature, though, is that, when he was finished, drenched and filthy, he never even questioned the thought that I was going to continue my shopping.

I defy any Knight in Shining Armor or Swashbuckling Pirate to be more chivalrous than that.