I miss Big Mean Kitty.  Yes I know it has seemed in my last few BMK posts that I felt a slight antipathy toward this psycho dog toy with homicidal tendencies.  But I guess I might have had a soft spot for him after all. 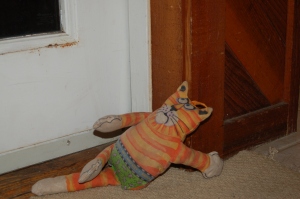 We shipped Big Mean Kitty off to the Great Landfill in the Sky this week.  We think.  He didn’t go without a fight.  As Cap’n Firepants lugged the garbage bag out to the trash, a series of squeaks emanated from the bottom.  The whole Firepants household stopped what we were doing and stared at that bag.  The Cap’n raised an eyebrow at me as if to say, “Are you sure you want to do this?”  I gulped.  “Keep going,” I bravely squawked, sealing the fate of Big Mean Kitty. “And make sure you put a really good knot in that bag.

When I returned home later that day, the garbage can was in the middle of our driveway.     I had to wheel it out of the way to pull my car in.  As I did that, and Dimples checked the mail, I surreptitiously took a peek inside.  Empty.  Phew.  No, I really mean phew.  It stunk in there.  If the garbage piled on top of him didn’t do him in, Big Mean Kitty surely would have suffocated from the fumes.

So, now we have the replacement Big Mean Kitty, which was kindly bestowed upon us by our cousins, the Globetrotters.  Seemingly unaware of the change in their leadership, the dogs welcomed the new potential troublemaker with a serious game of  Tug of War.

But, almost from the beginning I sensed there was something different about this Big Mean Kitty.  Maybe, it was finding him trying to escape, not long after the above episode occurred, through our kitchen cabinets.

Where Ya Going, Big Mean Kitty?

Or maybe it’s his attempts to scoot under the sofa out of sight. 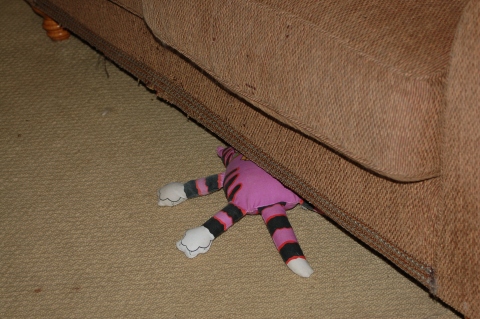 We Can Still See You!

But I think it’s the fetal position I keep finding him in that is the real clue.

This Big Mean Kitty is a Big Purple Pussy.

At least I don’t have to worry about him murdering us in our beds. 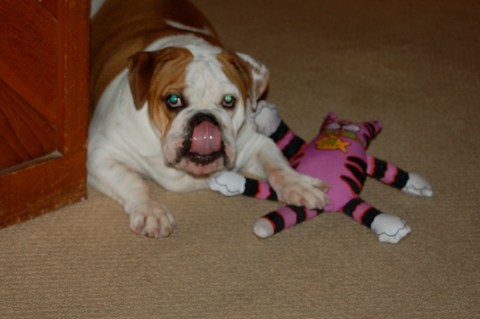