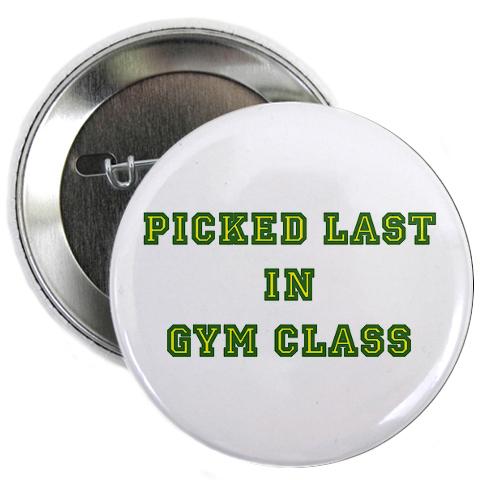 But I Won Every Spelling Bee

One of the things I am not known for is my athletic ability.  When I went to school, I went through a succession of P.E. teachers who felt that I was so non-athletic that it wasn’t even worth it to learn my name.  I was consistently called, “Hey You.”

I had a slight lapse in judgment one day, and admitted this to two of the P.E. teachers I now work with.  They have known me for ten years. They now like to call me, “Hey You.”

Anyway, I don’t think Cap’n Firepants was a rock star in P.E. either.  Apparently he was so traumatized by his whole experience in school before college that he won’t even tell me about it.

So, it was no surprise to me when Dimples got in the car after school the other day, and proclaimed, “I got a 36 on the Pacer in P.E. today.”

I was a bit perplexed by her cheerful attitude, but tried to play it cool.

“What do you mean, you guess?”

“Well, a 36.  That isn’t very good.”  I wasn’t reprimanding her.  I was just trying to think how to break it to her that she was the unfortunate offspring of some bad P.E. genes.

Oh, God! Was she bad in math, too?  Well, that wasn’t from my side of the family, at least.

“So-o-o, you did good?” I said, slowly, trying to figure out this whole new system of grading and accept the fact that a product from my gene pool can do well in anything related to athletics.

“Uh, great job…Hey, uh, just out of curiosity, what does your P.E. teacher call you?”

I could see her exasperated face in the rearview mirror, and it was pretty clear that this entire conversation had confirmed her fears that I had finally lost my marbles.

I really need to get that DNA test taken care of.

Those Are Not Her Mother’s Genes 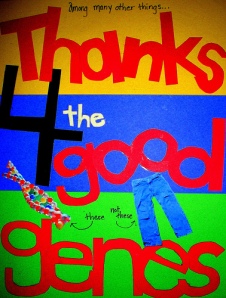 The older Dimples gets, the more convinced I become that she is not our biological child. Someone switched kids on us, and I’m starting to get a better picture of the other set of parents involved in this deception. Apparently they have the following people somewhere in their family tree:

Shirley Temple – There is not one person that I know of in Cap’n Firepants’ or my families with dimples. Where the heck did those come from? The REAL Parents. Don’t give me any lectures about pea plants and recessive genes. I’ve seen Temple singing “On the Good Ship Lollipop”, and it’s Dimples with tap shoes.

Elvis or Michael Jackson – The kid has rhythm. She has been taking dance for five years, and she actually can do it on stage without falling into the audience. I guess she could have gotten this ability from the Shirley Temple side of the family, but there’s a little more pelvis action in there than Little Miss Marker ever displayed. I am telling you, and most of our friends would be happy to attest, that there is not a smidgen of rhythm in Cap’n Firepants or me. Unless we’re drunk.

Ashton Kucher – Cap’n Firepants and I were both major geeks in school. I was labelled Four Eyes (so original) and the Cap’n won’t even tell me what humiliations he suffered. Not so with Dimples. Dimples wears glasses and suddenly it becomes a fashion trend. We don’t have to make plans for the weekend because her friends schedule every minute. She charms everyone she meets, and doesn’t even know it.

She does well in school, sings like a bird, laughs at herself if she makes an embarrassing mistake and decides, on her own volition, that she would like to go to bed earlier so she can get more sleep.

Somewhere out there is a family with an eight year old who is perpetually grumpy, stumbles around in her coke bottle glasses as she hunts for the Nancy Drew book she will spend the weekend reading alone in her room, and makes Eeyore look like an optimist.

I’m sorry, Biological Producers of Dimples, that you got stuck with the miniature version of Cap’n Firepants and me. You’re probably trying to get your money back on the Designer Baby you ordered.

Good luck with that.