Well, folks, the worst has happened.  I can’t believe that it’s happened to me, but it snuck up on me when I wasn’t paying attention.

I have become a BACKER-INNER!

In my defense, I haven’t exactly been at the top of my game this week for the following reasons:

A.  I got my butt out of bed early for two successive mornings during my summer vacation to participate in a “voluntary” teacher in-service.

2.  I did not stop for Starbucks coffee on my way to the in-service.  And I had time.  A LOT of time, dangit.  In fact, I shouldn’t have gotten up that early.  What the heck was I thinking?

H.  I spent the first of my in-service mornings worrying that Cap’n Firepants would be murdered by a stranger from Craig’s List who offered to buy our mother-in-law’s washer and dryer.

7.  I spent that same morning worrying that Cap’n Firepants would forget he was supposed to meet the guy from Craig’s List, and that the Cap’n might fall for one of those Craig’s List scams that you read about.  “No Cashier’s Checks,” I told him (the Cap’n)  “Cash Only.”  But then I realized that I did not tell the Cap’n it should be American money.  And that we don’t have one of those special lights to check if it’s counterfeit .  And, why is it that flight attendants don’t accept cash for drinks?  Should I text the Cap’n and tell him he should only take a credit card?  But we don’t have one of those machines…

10.  I came to the sad realization that I must have caffeine if I am going to be required to think clearly before 11 AM.  Also, I should get that app for drunk people that keeps you from texting when you are somewhat confused.  But, then I would never be able to text, I guess.

So, this all came about because I participated in a Robotics in-service for a day and a half.  As part of my role at my new school I volunteered (cough, cough) to be one of the sponsors of the Robotics Club.  I figured, hey, I learned BASIC when I was in high school – how hard can it be to program a LEGO robot to roll around on the floor?

Hmm.  A bit harder than I thought.  First, our team had to sort all of the pieces.  Then, we had to assemble the robots.  Two of us had no prior knowledge of Legos.  Sad, right?  Fortunately, our third member grew up eating, breathing, and uh, excreting the things, apparently, so she totally rocked in that department, thank goodness.

Fido. I wanted to name him Wonderbutt, but that was too many characters.

Then, we had to make it do stuff.  By programming it – not by yelling at it.  Caffeine deprivation is not helpful with this, either.

Our final challenge was today – we had to start 4 robots at the same time, and get them all to back into different “parking spaces” without sparking any Road Rage incidents.

My competitive compulsions overwhelmed my anti-backer-innering stance, and the GAME WAS ON!

As you can see from the video below, all 4 robots did fairly well.  My team programmed the 2nd robot from the left – the one that ended up in the third parking space (last one to backer-in).  The robot destined for the 4th parking space made it every single trial time – until I videotaped the experience.  Then it suddenly went rogue and acted like it was being driven under the influence.  Hope he wasn’t texting at the same time…

Who Died and Made You the King of the Parking Lot?

A few months ago, I wrote about one of my parking pet peeves – Backer Inners.  Now, I have a confession to make.

The reason that Backer Inners drive me crazy (no pun intended) is because I am a Wait Arounder.

I am one of those people who drive through a parking lot, looking for cars that are about to pull out.  When I see people entering a car, I glide to a stop a few feet from their spot, and put on my turn signal to politely indicate that I plan to use that spot as soon as they vacate it.

One of my friends despises Wait Arounders.  She deliberately takes her time getting into her car, adjusting her mirror, checking her makeup, shaving her legs, etc…, until the Wait Arounder eventually gives up and goes hunting for another spot.

I am worried that one day, my friend will be in a parking lot and I will inadvertently Wait Around, not knowing that she is the person in the car, and it will become a Stubborn Test of Wills that will end up on the 6:00 news.

Dimples and I left a restaurant, and got in our car.  I turned on the air, and then thought it might be good to check my iPad to see if her books had come in at the library so we could swing by to pick them up.

I heard the honk, and looked around.  There were two cars parked pretty close to each side, but they were empty.  No one was behind me.

“What was that?” Dimples asked.  “Was that you?”  She likes to blame me for anything that irritates her.

“No.  I think someone was just locking their car.”

I looked a little bit farther.  A truck was waiting, and the driver was looking at me angrily.  He was a Wait Arounder.  And he was rudely insinuating that I was being rude by not Backering Out.

I thought about my friend, the Anti-Wait Arounder.  I knew what she would do.

Dimples looked at me expectantly.  I have been trying to teach her to be more assertive.

But the truck driver looked rather big and red-faced.  And possibly shotgun carrying.

I have also been trying to teach my daughter to stay alive.

I pulled out of the spot.

“Some people are so impatient,” I said to Dimples in a calm voice.  I turned up the radio.

And said some very not nice things under my breath about rude Wait Arounders. 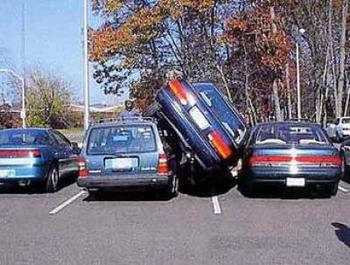 As soon as I perfect this parking method, I will not have to worry about Wait Arounders any more. I will also not have to wait around. I can stop hating myself. At least for that…
photo credit: https://www.sodahead.com

On Monday, Dimples and I began our Spring Break Adventure with the Globetrotters.  (Dimples is my 9 year-old daughter.  The Globetrotters are our world-traveling relatives, who live in Houston.  The fact that they travel a lot is ironic, when you think about it – since the actual basketball playing Globetrotters are probably not allowed to “travel”.)

Dimples never seems quite certain about my navigation skills. I try to tell myself that it is not me that Dimples lacks confidence in, but that it is the Houston drivers.  Of course, that doesn’t explain her saying, 5 minutes after I have backed out of our San Antonio driveway, “Are you sure you’re going the right way, Mom?”  But I think most people would forgive her for tremulously asking, “Do you want me to read the directions to you?” as I glance down at my trusty Google print-out on the seat beside me once I reach Houston, and the windows of our car begin to vibrate while cars whiz past.

If you have never driven in Houston, you must try it some time.  It will make you appreciate the love that Texans have for concealed weapons.

While we were in Houston, we learned that it had just been named #3 of the Worst Places to Drive.

Mrs. Globetrotter hails from St. Paul, MN – coincidentally chosen by the same magazine as the home of the best drivers.

You can see how driving in Houston might be frustrating for Mrs. Globetrotter.

“I hate Backer-Inners!” she seethed as we were hunting for a parking place on Tuesday at the Houston Galleria.

I have to agree.  Backer-Inners are very irritating.  I do not understand the need to spend 10 minutes to back into a parking space so that you can quickly whip out of it when you are finished with shopping.  I am pretty certain that, if you did the math, it would take you less time to pull in forward, then back out quickly over the crowds of shoppers when you are done.  Then you have the extra bonus of having rid the world of a few more Real Housewives of Houston.

But, neither Mrs. Globetrotter or I am from Texas.  So we apparently are unable to understand the logic of Backer-Inners.

We also saw Backer-Inners at Target, the underground parking garage for the 3-story Restoration Hardware, and the Kemah boardwalk.

The only time I have been jealous of Backer-Inners is when we are leaving a concert at 11 P.M., and they have the advantage of Forwarding-Out into the line of traffic that has wound around the 10 levels of the parking garage while we stare at the wall and forlornly turn on our car lights hoping that someone will take pity on us and patiently hold up the rest of the line while we try not to hit poles or other cars as we counterintuitively reverse into the traffic.

I don’t know if Backering-Innering is what put Houston close to being the best at being the worst, but considering that the majority of drivers are maneuvering oversized trucks into spaces designed for compact cars, the mystery becomes even more confounding.  Everything is bigger in Texas – except the parking spaces.

Dimples never questioned the driving of Mrs. Globetrotter while were in Houston, so I suppose that’s a sign.  I don’t know why the kid thinks I’m a bad driver. Her aunt is the one with the nickname “Crash”.  And I did not learn how to drive in Texas. I learned in New Orleans, Louisiana, where the drinking age is 3, the driving age is the first time your dad passes out at the wheel, and there’s no need to park when you can get drive-thru daiquiris. 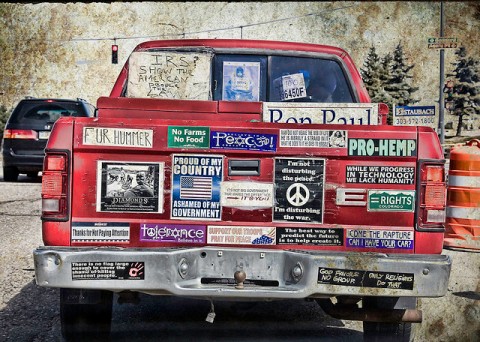 Now, why would you want to back in and deprive passersby of this bumper sticker masterpiece?