Everything I Know About Marriage I Learned From Two First Graders

I learn a lot from my gifted students.  For example, according to my Kindergartners, the participants on Toddlers and Tiaras are way different on stage than off.  And, according to my third graders, Ellen DeGeneres is a girl, not a boy, and her deal with J.C. Penney caused a “thing” much debated on Facebook.

It’s almost the end of the year, but it’s never too late to get educated.  So, I should not have been surprised by the edification I received from my first graders today on the topic of marriage.

As some of you know, I will be teaching Gifted and Talented students at a new school next year.  So, today, I introduced my current students to the woman who will be teaching them next year instead of me.  She is:  very nice, very pretty, one of my best friends, and just happens to be married to my current principal who, for the purpose of this blog, we shall call POTUS (Principal of The Unbelievablyawesomest School).

I took Mrs. POTUS to the classroom of three of my 1st grade students.  As soon as we opened the door, one of them shouted, “Hello, Mrs. POTUS!”

When the three came out into the hall, Mrs. POTUS, smiling, said, “How did you know that I am married to Mr. POTUS?”

And my student, obviously using the powers of deduction that he learned from me, said, “Because you kind of look like him!”

Well, this was funny to me for several reasons – the obvious one being, of course, that people look like their pets, not their spouses – but the main one being that Mrs. POTUS, other than sharing the attributes of most humans, looks absolutely nothing like Mr. POTUS.

The same student, a few minutes later (after we explained that Mr. and Mrs. POTUS were not blood relatives and that, other than in the Appalachian Mountains, married people do not necessarily resemble each other) started to ask Mrs. POTUS a question, and then immediately forgot it.

Mrs. POTUS said, “That’s okay.  If you think of it later, you can just tell Mr. POTUS, and he can tell me.”

To which another one of my logical students said, “Do you and Mr. POTUS talk sometimes?” in apparent wonderment at such a concept.  I’m not sure if this was more along the lines of the “Do you and Justin Bieber talk sometimes?” kind of astonishment, or the “Are a husband and wife allowed to talk to each other?” confusion that often happens when children watch too many episodes of Wife Swappers.

So, from these two students, I now know:  that married people should look alike (which makes me better suited to enter a union with my wrinkled bulldog than with my dear husband, Cap’n Firepants), that married people only talk on rare occasions – and that it’s good I am moving to a new school next year because I’ve certainly accomplished a heckuva lot at this one. 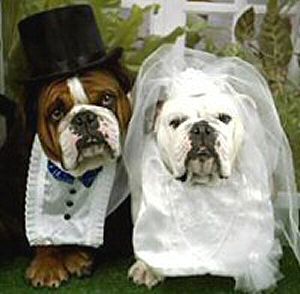