What If I Was Competing in the International Extreme Ironing Tournament? Would That Have Made It Okay?

Quick pop quiz. Your 10-year old daughter qualifies for Nationals in her chosen sport, let’s say Chess Boxing.  (Yes, that’s really a sport.)  And she has to travel to another state to compete.  Do you let her go?

Well, of course.  She’s been preparing for this Chess Boxing tournament for three years.  Duh.

Oh wait.  Second question.  Do you go with her, even though there will be four other adults accompanying the team of 6 girl, uh, Chess Boxers?

Are you her father or her mother?

This is important.  Think carefully.

I don’t care what you answered.  You’re wrong.  Especially if you’re her mother.  Because whatever mothers do, they are wrong.  According to the experts – other mothers.

If you are her mother, for example, and you have an important professional conference to attend that you’ve been trying to get financing for the last 24 months and it happens to overlap the Chess Boxing Extravaganza and your husband volunteers to accompany your daughter so she does not have to travel on her own with 5 other girls and 4 adults, and you can then participate in the conference for which you paid a nonrefundable registration fee, then you are, apparently, someone “who hates kids.”

Now, if you are her father, and you opted to go with your potential Chess Boxing Champion, and are stuck on a trip with 6 girls between the ages of 10 and 12, and four women, for 5 very long days, then it takes you about 5 minutes into the trip to realize you are also very wrong.  Fortunately, you are the only one who realizes this fact, and the rest of the population on this planet canonizes you and declares you the “Best, Most Patient Man to Walk the Earth Since Gandhi Passed.”  When you get home, there is a ticker-tape parade in your honor and a National Holiday is named after you – “The Man Who Went With His Daughter to Her Competition Because Her Mother Was Too Selfish Day.”

Of course, you could have each made different decisions, resulting in the mother “doing her duty” and resenting that she will not have another opportunity to attend the conference for at least 4 more years, and the father going about his daily life while attempting to console your bulldog, Wonderbutt, for the five days of your absence.

But I guarantee that no one will crown the mom to be “Best, Most Patient Woman to Walk the Earth Since Mother Teresa.”

So, I guess what I’m trying to say is:

A.) Don’t get your daughter involved in Chess Boxing; Giant Pumpkin Kayaking is much safer

5.) Congratulations to the Same-Sex Marriage Proponents in the USA on today’s victories, maybe now we can

D.) Work on Same Expectations for Parents No Matter What Your Gender and

III.) Cutting Moms Some Slack.  Or slacks.  But don’t make her iron them.

Mrs. Cap’n Firepants Trades Nothing for Something and Ends Up Playing for the Philadelphia Phillies

So, first of all, I am totally psyched that The Daily Show returns tonight.  My daughter wants to become a teacher because she gets summers off.  I said, “No, you need to be Jon Stewart because he gets two weeks off for every holiday, plus the entire summer – in both hemispheres.”  Not that I’m bitter or anything.  Just suffering from separation anxiety.

In other news, my anti-depressants seem to be somewhat working, which means my That-Idea-is-Stupid-Filter is working again.  Which means it’s very difficult to think of blog topics.  The only reason I am typing anything now is because I forgot to take my lunchtime dose, so my filter is being stomped down by the amazingly strong irritation that I begin to feel when things start wearing off.

I always thought people were idiots for refusing to take their medication because they lost their creativity, and now I’m beginning to understand it a bit.  I mean, it’s nice to go 12 hours without feeling an overwhelming desire to slit my wrists, but it does seem like I generate a whole lot more writing ideas when I’m miserable.

I don’t see why there has to be a trade-off.  I mean, there is such a thing as getting something for nothing, despite what your mother may have told you.  I just heard about Mike Cisco being traded to the Los Angeles Angels for no compensation.  Nada.  (That means “nothing”, right?  I mean, I’ve never really checked, but I’m just guessing from the context clues.  If it means something else, and it happens to be offensive, I completely apologize.)

So, anyway, the Angels got Cisco for nothing.  I don’t see why I can’t get my sanity for nothing.  My sanity certainly doesn’t effect as many people as a baseball player, who I admit I never heard of, but whose trade qualifies him for the Yahoo sports page.  You’re not going to see my trade on any sports page, so I’m pretty sure that means that I am worth less than Cisco.  Ergo, I should get my sanity for less than nothing.

Reading that over, it seems like there might be some fault in that logic, but I can’t really be bothered with such trifling trivialities.  It’s almost time for The Daily Show and my bulldog is demanding my presence on our armchair.  And if Jon Stewart talks about the Cisco trade, I want all of you to be my witness that I brought it up first.  That’s what he gets for going on a two week vacation.

The problem is, I don’t have a trading card. I need to work on that.
photo from: http://sports.yahoo.com/blogs/

I find moms intimidating.  Especially in large numbers.  Like when they are supporting their daughters’ sports teams.

All of these years I’ve been preaching to my students about not caving in to peer pressure during their teens, and it turns out that adolescence is merely a brief introduction to the angst you will experience as the mother of a female involved in athletics.

I sang in the choir when I was growing up.  My mother’s only responsibility was picking me up on time after school from rehearsal or performances.  And her success record in that department was only about 50%.

So, I thought I was doing pretty good when I started shuttling my daughter to and from her swim practices three times a week in a timely manner.  Sometimes, I even go above and beyond and actually stay to watch the practice.

It is becoming more obvious each month that my participation would register about .01 on the Richter Scale of Supportive Moms.

On competition days, when all of the other moms wear the same blinged-out t-shirts, loudly proclaiming the name of the team, I shamefully wear a non-denominational blouse whose only writing can be found on a small tag in the lining that says, “Hand Wash Only.”

When all of the other moms wear 20 inch photo buttons on their chests of their daughters’ smiling faces, with ribbons trailing from the bottom, I forget my button at home, and hope that I will not have to admit to anyone that I am not even certain of its current location – which means that I could have used it as a coaster, the bulldog could have eaten it, or it might have been thrown into the box labelled “Miscellaneous Christmas Decorations that are not Ornaments, Candles or Nativity Sets or That We Left on the Shelf Until February Because We Forgot About Them and We Never Dust.”

When all of the other moms get together and plan yet another party to celebrate Winter or Groundhog Day or Surviving Two Whole Weeks Without a Party, I am the only one who meekly says, “Um, is this really necessary?”

When all of the other moms help their children find the miscellaneous pieces of clothing that they shed all over the natatorium throughout the day, I am the one who shrugs and says to my kid, “Well, you wore it here, so it has to be somewhere.”

When all of the other moms stand by with towels for their shivering daughters in between competitions, I am the one whose daughter walks up, turns to the person to my side, and says, “Daddy, can you hold my towel for me?”

Some day, the other moms are going to have one of those meetings that I never attend, and they are going to kick me out of the ‘hood.  The Mother Hood.

I’m going to stand strong, though.  You don’t have to join the Mothers with Unlimited Gem-stoned Shirts to prove your love to your kid.

Just get her an iPhone, and she’ll get the message.

It all started because Dimples does not like to sweat.

As the typical helicopter-missing-a-blade parent, I have been trying to guide Dimples through various extracurricular activities in the hopes she would find her niche.  For awhile, I thought we had hit on the right combo with dance and gymnastics.  As I mentioned before, the kid has ungenetically enhanced rhythm.  She also has weirdly fluid flexibility.

But when we were getting ready to sign up for a new season, Dimples announced from the back seat of the car (her usual spot for stunning proclamations) that she guessed she didn’t really want to do gymnastics again.  The same kid who does cartwheels and handstands all over the house declared that she no longer wanted to do them. In the one place it was actually encouraged and there were spotters and a big foam pit.

“Uh, you don’t want to do gymnastics?” To me, this was like Wonderbutt suddenly declaring that he would rather not eat the piece of cheese that had miraculously fallen to the floor during the preparation of dinner.

“It makes me sweat too much.”

My bipolar brain started duking it out immediately.  One side was thrilled because we would save money and have more time.  The other side was bummed because we thought we had found her “passion” in gymnastics.

Ignoring the inner battle, I felt obligated to ask, “So, is there something else you would rather do?”

“Swimming” was the surprising answer.

Why was this surprising? Because she spent the first two summers of swimming lessons avoiding putting her head under the water.  She was over that now, but I never would have guessed as I begged her to please, please just put her face in and blow some bubbles years ago that she would one day decide that swimming was her all-time favorite sport.

For a couple of days after her condemnation of the sweaty sport of gymnastics, I despaired of finding any kind of suitable replacement.  There seemed no point in swimming more laps if she wasn’t actually going to do anything with it.  Then I remembered reading an article about a local team. A synchronized swimming team.

After I ineptly attempted to explain all of this to Dimples, she gamely decided to try it out.

So, one night, Dimples joined the team at a practice while I talked to one of the board members about the requirements.  As I listened to explanations about the financial commitment, the required fundraising, and the mandatory volunteer hours, I started realizing my mistake.

As I was realizing my mistake, Dimples was quickly getting used to this no-sweat activity.  By the time I had concluded that it was time to ditch this idea and try sky-diving instead, Dimples had concluded this was her new passion.

So now we are rolling into Year 2.   Dimples gets to do her dance and gymnastics without sweating, and I get to sweat how I’m going to pay for it. 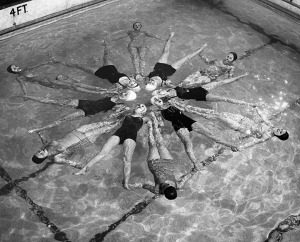