I’m Not Dead Yet

So, I went to see Dr. Jimmy, the other day, and he seems to think it is unlikely that I have a blood clot, despite the overwhelming evidence on the internet to the contrary.  Because I love Dr. Jimmy (in a completely Hippocratic way, of course), I feel somewhat relieved.  To be honest, I almost did not go to see Dr. Jimmy because my leg felt a lot better on the day of my appointment, but we haven’t seen each other in awhile, so I did not want to hurt his feelings by canceling my appointment.

Plus, I wasn’t sure if they had one of those 24-hour cancellation policies requiring me to pay anyway, so I might as well go and try to get my co-pay’s worth.

Dr. Jimmy, like me, has a Dorfenbergerthalumus that overheats when he is late.  This is a very rare trait in doctors, as many of you will attest, I am sure.  My appointment was at 11:30.  At 11:40, the nurse called me back to the exam room, and asked me a few questions.  After taking my blood pressure, which is one of the few medical tests I always ace, she walked out, and said that Dr. Jimmy would be in soon.  About 60 seconds later, I heard my chart being taken out of its pocket on the front of the door, a quick knock, and Dr. Jimmy strode in.

“That was fast!” I commented.

He looked at his watch, and shook his head, frowning.  “I hate running late.  But I’ve had a couple of people this morning who had more than one issue.  I don’t mind if they need to talk about multiple problems, but I wish they would tell the office when they make the appointment, so we can plan enough time for them.”

I tsk-tsked, completely sympathetic, despite the fact that, the day before, I had considered doing the same exact thing when my throat morphed into a volcano.  “I’ll just have to ask Dr. Jimmy about that, too,” I thought, as I swallowed a Zyrtec-D, which calmed the volcano, making my near Appointment Faux-Pas wholly unnecessary.  I didn’t have enough time between the throat scare (is it strep?  Oh, my God, if I don’t get it diagnosed in time, I’m going to die of Scarlet Fever.  Or, at least be blinded like Mary in Little House on the Prairie.  I am not nice like Mary.  Blindness would definitely not improve my temperament…) and my appointment to imagine any other new ailments, so, mercifully, I only had one enigma for him to solve.

Of course, he could not solve it.  Because there is probably nothing wrong.  At least nothing life-threatening.  But it helps to have him say, “No, I don’t think you’re going to die from a pulmonary embolism.”  It’s definitely worth the $15.

Even if he does smile a bit and shake his head.

Wonderbutt waiting in the chair for another chance to give me a blood clot. He is looking away because he is mad at me for walking past the chair instead of settling in and folding myself like a pretzel so he can get comfortable.

Wonderbutt – still waiting, completely forlorn that I have not joined him in the chair for our nightly ritual.  Don’t worry – I sat with him after that.  Didn’t want the poor guy to die of a broken heart.  Though that would be fitting revenge for giving me a blood clot.

So, I’m pretty sure that my bulldog, Wonderbutt, has given me a blood clot.  And I just thought I would mention this to you before I die of a pulmonary embolism.  And before Cap’n Firepants takes my internet away because he is convinced that it contributes to my hypochondria.

My leg has been achy for a couple of days, the kind of achy that you get when you’ve run a marathon.  But. I. Have. Not. Run. .  . Around the Room.

So, in the interest of saving myself a trip to the doctor, I Googled my symptoms, and I have come to the conclusion that I have a blood clot.

It is possible that sitting on my butt in front of the computer could be the cause of this medical problem, but I choose to blame another butt – Wonderbutt.  I don’t think it is a coincidence that Fat Boy has been cuddling with me on the armchair every night, cutting off my blood circulation while he gets good and comfortable.  I thought it was kind of sweet the way he insisted that I contort myself into the exact right position every night before he would leap on the chair and fall in a heap on my legs, sigh deeply, and commence snoring.  But now I know that he is just trying to kill me.  It’s one of those little-used murder methods known only to true homicide connoisseurs like Agatha Christie – murder by a blood clotting bulldog.

And no, this paranoia is not the result of three nights of Very Little Sleep or my admiration of Rapper Heavy D, who, sadly, did die from this exact problem.  And, yes, I did discover that fact on the internet.

The good news is, as long as my leg feels funny, the clot has not traveled to my lungs, (at least, that’s my expert opinion), so I still have time to type out a couple more blog posts before my demise.

Oh wait, according to outtobrunch on geteverystupidquestionansweredhere.com, it could just be a pinched nerve.  Or I’ve been sitting with my wallet in my pocket too long.  The latter is unlikely, I think, since I don’t own a wallet.

O.K.  Just talk amongst yourselves while I get this figured out. 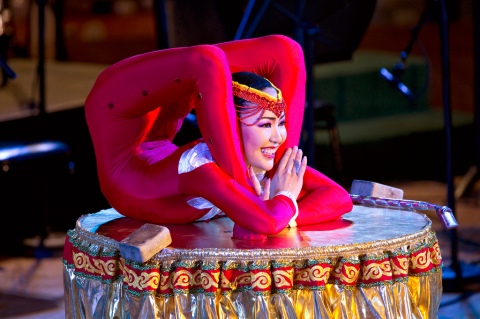 This is kind of the way I have to twist my body to let Wonderbutt sit in the chair with me. Do you think this lady gets blood clots? By the way, note to self and anyone else who is interested, do not search for Google images on “blood clots” unless you want to be scarred for life.  And “contortion” can be a little scary, too.  Consider yourself warned.
photo credit: United Nations Photo via photopin cc

Posted in Depression, Disease of the Day, Humor, Wonderbutt