Do Not Hire Me to Be Your Personal Shopper

Apparently, I never learn.  Or I’m very stubborn.  Cap’n Firepants would definitely nod his head vigorously to the latter.   Of course, he’s the source of my frustration right now, so he has no right to be assassinating my character.

Cap’n Firepants usually leaves birthday shopping to me.  Our beautiful daughter, Dimples, has her special day this week.  So, I, the forward thinking, obsessive compulsive wacko mom that I am, have been stacking up gifts for her for awhile.

The day before the day before her birthday (actually the night before the day before – 10:00 p.m., to be precise), the Cap’n casually questioned whether he needed to contribute anything to the Big Day.  I noted to him that I had pretty much bought her just about everything on her list except for rats and a 200-piece Crayola art case.  As he is disinclined to allow her to become a rodent owner, I suggested that if he was determined to put some of his own physical effort into the Big Day, he could roll on down to Toys r Us the next day and buy her the art case which was prominently featured with stars and hearts encircling it on her list.

After he Googled the nearest Toys r Us to his office, and I e-mailed him the exact specifications of the art case, as no substitutes would do, the plan was set.

The next afternoon, Cap’n Firepants texted me that he had dutifully made the trip to Toys r Us.

“I bought her the Clownfish Air Swimmer,” he texted.

Fortunately, there were no students in my classroom in the moment (which there wouldn’t be since I never check my phone while I’m teaching anyway), as I think I may have mumbled a few not-so-appropriate words when I read his text.

Allow me to digress for a moment.  Trust me, it relates.

Readers of this blog during the last month or so might recall my three-part series regarding the X-box Kinect Debacle of last Christmas.  It’s full of drama and suspense, so I highly recommend it.

I concluded the story with my great idea for this year’s joint Christmas gift for the Cap’n and Dimples – an Air Swimmer – THE hot toy this season.  (If you haven’t seen the video for this, you must.  It’s highly amusing.)  Anticipating the run on this  fish that would occur once everyone’s shopping got into full swing (and once my multitude of readers read that day’s post), I made sure that I ordered and received the gift way, way, way ahead of time. It’s been sitting in my closet for almost a year – O.K., well maybe a month.

I had already made plans with the guys at work to fill it up with helium for me and do a few test runs so I could scare the bejesus out of Dimples and the Cap’n on Christmas morning.  Wonderbutt’s reaction would be an added bonus.

And with one short text, Cap’n Firepants had let the helium out of my balloon.

I know.  I know.  Blah, blah, blah.  Why does it matter that she’s getting it a little earlier, and that the Cap’n is the Surpriser instead of a Surprisee?  Don’t lecture me on the Spirit of the Season and thoughts that count and all of the other clichés that come to mind.  I realize that there are children starving in Third World countries and that me whining about this is like a teenager whose  life is destroyed by a pimple in the middle of her big toe and it’s not even sandal season.

Apparently, I am not Nostradamus because:

A.  The Air Swimmer has not even come close to being sold out

2.  It is now cheaper than it was when I first bought it.

This means I will not be Craig’s Listing this rip-roaring redundant brand new toy.  And giving it to Dimples and the Cap’n anyway is not an option either because, way before Christmas rolls around (probably in the next week, I’m guessing), they are going to be sick of Air Swimmin’.

So, creative People – you got a suggestion?  Let me have it. 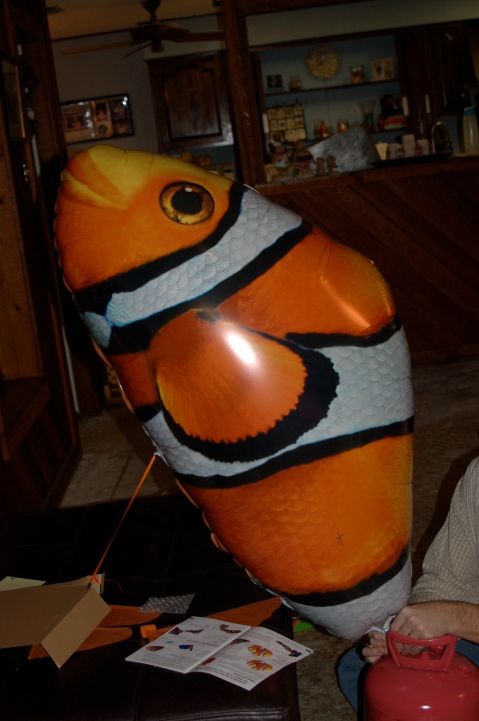 Air Swimmer Getting Tanked Up by Cap'n Firepants 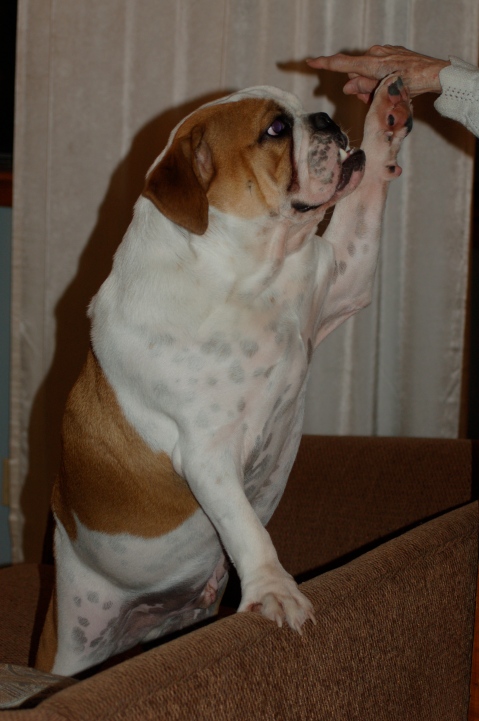 Who Wants to Butcher the Balloon? I Do! I Do!

His Days are Numbered

Our family is being stalked by Big Mean Kitty.  He apparently took a much-needed shower and hopped on a plane to Houston so he could greet us at our cousins’ apartment this weekend upon our arrival.  He arranged himself strategically in the entry hall with his rear end up in the air–the better to freak me out. 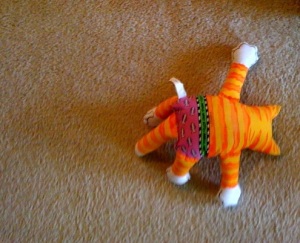 Big Mean Kitty Shows Us His Best Side

Our cousins, The Globetrotters (the most well-traveled couple I’ve ever met), tried to convince me that they had just purchased this Big Mean Kitty at their local grocery store, and that I shouldn’t take its pristine appearance and precise positioning personally.

In her attempts to persuade me that this Big Mean Kitty was a harmless imitation of the homicidal one we had left (I thought) at home in San Antonio,  Mrs. Globetrotter went out the next morning to find one for us to take home.  The last one at the store was purple instead of orange, only somewhat alleviating my suspicion. Just because the Houston grocery store near our cousins is the only one on God’s green earth that still sells those dog toys doesn’t prove our own Big Mean Kitty hadn’t kidnapped and gagged their new one so he could continue his quest to make me appear mentally unhealthy.

It did help the Globetrotters’ case, though, that they have two dogs of their own.  I mean, it would have been really weird if they had a Big Mean Kitty and no dogs, don’t you think?

Lola, their Boxer, was quite fond of Big Mean Kitty #2.  She pranced around with it in her mouth, basking in our compliments about her amazing predatory skills.  I think, however, that her obvious pride had less to do with any affection for the toy than with her desire to flaunt it in front of her little brother, Monté, the Terrier. 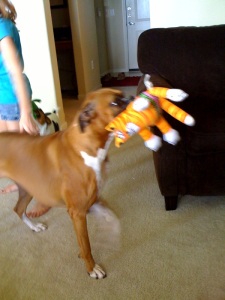 Big Mean Kitty Flaps Around in Lola's Jaws of Death

Monté saw his chance when Mrs. Globetrotter brought the purple kitty home.  He was quite certain this new toy would be for him, and was very disappointed when I put it in my suitcase, and carefully zipped it most of the way, assuring myself that Purple Kitty would not be able to make his way out and learn bad ideas from Big Mean Kitty.

Five minutes later, out into the living room pranced Monté with the new Purple Kitty.  The zipper may have deterred Purple Kitty from escaping, but did not keep Monté from working his way into suitcase.  According to Monté, zipping your suitcase most of the way only works when you have boring stuff like underwear in your suitcase. 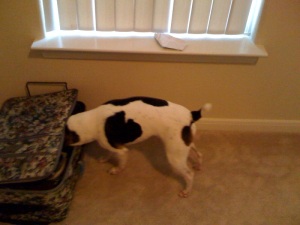 Monte is Determined to Root Out Purple Kitty

After Purple Kitty was safely zipped all of the way into my suitcase, poor Monté was again toyless.  Well, actually, he had tons of toys, but being shut out of two Big Mean Kitties seemed to destroy his interest in anything else.

To console him, Mrs. Globetrotter brought out a new toy, a kind of miniature version of Big Mean Kitty stuffed for some obscure reason into an ice cream cone. 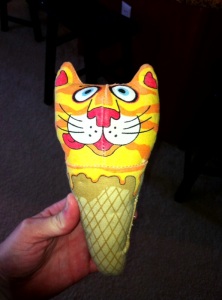 Beware the Kitty in a Cone!

Both dogs immediately lost interest in Big Mean Kitty and began to fight over the new one.  Cruelly tossed to the side without a backward glance, Big Mean Kitty watched from the floor as Monté and Lola played their game of Brains vs. Brawn over the mildly disturbing Kitty in a Cone toy.

Monté knows he cannot win against Lola’s viselike teeth, so he has (with Mr. Globetrotter’s coaching) perfected the sneak attack, lulling her into complacency until she begins to lose attention.  As soon as her focus breaks, he sweeps in to swipe the toy away.  Only to drop it immediately when Lola leaps up and towers over him.

And so, the game continued.  Monté and Lola played their parts tirelessly while Big Mean Kitty sat there and plotted his next move.  The introduction of Kitty in a Cone was but a small prelude to the fate that awaited him when we returned to San Antonio.  Purple Kitty was about to usurp BMK’s control of the Wonderbutt household.  Intimidation was no longer enough.  It was time for a new plan…