I Guess I Expect Too Much… 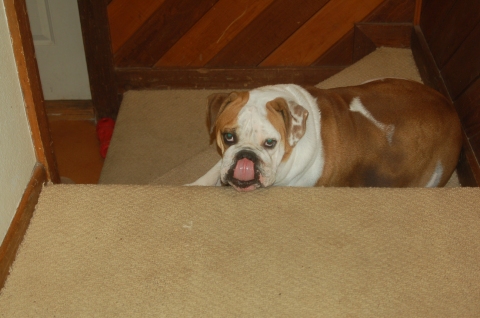 Our bulldog, Wonderbutt, who will be 2 in October, may be a texting genius, but there are still a few lessons left that he needs to learn.

If you are interested in reading other texts from Wonderbutt, click on the “Wonderbutt Texts” category on the left!

Another Kind of Butt

For those of you who are new readers, one of the frequent topics in this blog happens to be the adventures of our bulldog, AKA Wonderbutt.

Wonderbutt has many endearing traits, although he can be a little challenging sometimes.  Today’s post, however, is not about Wonderbutt and one of his epic escapades.  Today I am going to address the not-so-attractive qualities of someone else in the “Butt” family – Butthead.

The particular Butthead to which I am referring may be someone you have encountered as well.  Unfortunately, you, Dear Reader, could actually be the Butthead, yourself.  If so, and you recognize yourself in this post, I will not be upset if you cancel your subscription.

Chances are, though, that the Butthead in question  is not reading this, or won’t recognize herself even if she does.  So I think my subscription stats are pretty safe.

We went to a concert last night.  It was the last Maroon 5/Train performance of their tour.  It was sold out.  We had lawn tickets, and arrived at Woodlakes Pavilion in Houston about 15 minutes after the concert had started.  There wasn’t a whole lot of lawn left.

We finally found a large enough spot for the five of us, including Dimples.  We really couldn’t see, but Dimples had a good attitude about that.  She was fine with just hearing the concert, and I figured we couldn’t be too picky since we hadn’t paid a lot for the lawn tickets and hadn’t gotten there as early as we planned.

What I hadn’t remembered from the last time I sat on a lawn for a concert (pre-Dimples), was that smoking is okay in that section. What I had way underestimated, apparently, was the number of people who still smoke, and can’t seem to go 5 minutes without a cigarette.

The Butthead was a woman in front of us who, and I swear this is not hyperbole, went through at least 10 cigarettes, if not more, during the span of the concert.  As soon as she extinguished each butt on the ground (which reflexively freaked me out each time because of the Texas wildfires we’ve been having), she would light up a new one.  Not only that, but she had for some reason decided that it was rude to blow her smoke into the backs of the people in front of her.  Instead, she turned around and exhaled into our faces.

There were others smoking around us, as well, and before long, Dimples had itchy eyes and a disturbing cough. I led her to another section where we attempted to stand as upwind from the smoke as possible.  But it was standing room only, and before long Dimples’ little legs were tired, and we returned to our picnic blanket.  I had the ingenious idea for us to turn our backs to the stage, since we couldn’t see it anyway, protecting Dimples from the direct onslaught of Butthead’s smoke.

I understand that if we had sprung for the higher priced seats, we would not have had this experience.  But I find it kind of elitist that only the people who have more money are guaranteed protection from second-hand smoke.  The whole theater, after all, is outdoors, and having all of the smokers concentrated to one section makes it pretty certain that the (apparently rare) spendthrift non-smoker is going to be enveloped in a noxious cloud that rivals Wonderbutt’s own gas attacks.

So, to the Butthead at the concert last night at the Woodland, here’s Whatimeant2say:  “I’m sorry you are so addicted to smoking that you can’t even stop for 5 minutes while you’re enjoying good music.  But maybe next time you can wander away from the crowd to light up.  Just because you don’t respect your own body doesn’t mean you have to wreak havoc on ours.”

And to those of you who smoke, but respect others by “taking it somewhere else”, thanks.  As a token of my gratitude, I will make an attempt to contain Wonderbutt’s fumes as well.

You Know Who You Are

I am looking for the line.  That line that all adults seem to cross where they turn from hip, risk takers who love to attend concerts, into cranky anxious people who keep telling you to turn the music down.  There’s gotta be a line, right? Or actually, a thick border, I’m thinking, because I doubt this happens over night.  We all know those adults, right, the ones who seem to be mired in the last century?  They surely weren’t born that way.  So, at what exact point did they decide to step to the right on the moving sidewalk of life and let everyone else run past?

I am on the lookout because I seem to remember from my youth observing a lot of people in this particular decade of age-itude who had crossed over to the dark side.  So I am wary of doing the same.  Is it my refusal to participate in Facebook that marks the beginning of the end?  Or the fact that I switch my radio to NPR whenever my daughter isn’t in the car?

Although I am actually trying to stay on the youthful side of the line, I am suddenly aware of people who are ready to push me over anyway.  The surprised pause in the conversation when I quote the lyrics of a Top 20 song gives them away.  So do the raised eyebrows when I wear a skirt that doesn’t cover my knees.

The biggest threat, though, seems to be coming from within.  My own body seems to be ready to betray me.  I love to try new things, and I finally have enough self confidence at  42 to actually try them.  For example, I never ice skated as a child, but tried it a few years ago with my daughter.  I loved it. I took her yesterday, and I was so touched that she still wasn’t embarrassed about me skating with her that I skated almost the entire time.  And now, my body is letting me know that it does not approve of such unbecoming behavior from an adult.  My muscles ache and I’m still exhausted 24 hours later.  My daughter, on the other hand, went skating again today, and is currently turning cartwheels in the living room.  The kid makes Tigger look he should be put in a nursing home.

We’re taking our daughter to a Maroon 5/Train/Matt Nathanson concert in a month.  Not exactly cutting edge music, but it’s not Garrison Keillor, either.  It’s her first “real” concert;  she can’t wait.  I’m actually more concerned that the music isn’t too loud for her, since she held her hands over her ears during two hours of Trans-Siberian Orchestra.

She was excited to learn that we get to sit in the grass, thinking that we bought those tickets for the better ambiance, rather than the relative cheapness.  I’m wondering if we should have sprung for some chairs – you know, because my creaky old body might have a hard time getting vertical again after sitting for two hours on the ground.